As published in the Fall 2016/Winter 2017 edition of Viewpoint, a publication of The Edward S. Harkness Eye Institute and the Department of Ophthalmology in the College of Physicians and Surgeons, Columbia University Medical Center

NEW YORK, January 10, 2017 – About eight years ago, philanthropist and entrepreneur Donald Jonas received some devastating news from his doctor at Columbia’s Department of Ophthalmology. “I hate to tell you this, Mr. Jonas,” Stephen Tsang, MD, PhD told him. “but it looks like you’re going blind.” 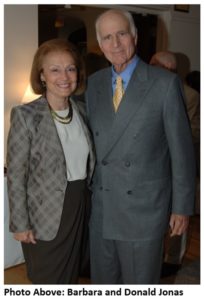 Dr. Tsang diagnosed Mr. Jonas with Late Onset Retinal Dystrophy (LORD), a rare genetic eye condition that destroys the cells responsible for peripheral vision and depth perception. It was the beginning of a personal journey for Mr. Jonas and his wife, Barbara, that would have the potential to profoundly affect the lives of thousands of future patients facing vision loss.

This [past] fall, inspired by their personal experiences, the couple and longtime Columbia University donors announced the creation of Jonas Children’s Vision Care, a first-of-its kind, integrated effort to prevent and treat blindness and other serious eye disorders in children. The project will, among other things, help establish a state-of-the-art pediatric ophthalmic diagnostic and imaging center at New York-Presbyterian/Morgan Stanley Children’s Hospital. “It’s very tough losing a little more sight every year,” says Mr. Jonas, a retired retail executive. “I bump into people; I try to avoid crowds. It was important for me to do something.”

The money to pay for the effort will come from the Barbara and Donald Jonas Family Fund along with matching funds from Columbia Ophthalmology to support the effort. The Barbara and Donald Jonas Family Fund was created in 2005 with more than $44 million raised through a Christie’s auction of about half of the family’s contemporary art collection. The collection included works by Willem de Kooning, Mark Rothko, and Franz Kline, among others.

Over the decades, the Jonases have supported a wide array of causes, including efforts aimed at improving mental health treatment, reducing nursing shortages, and helping veterans. The Jonases made their first vision-related gift in 2013, when they decided to support the research of Dr. Tsang, who, in addition to serving as Mr. Jonas’ ophthalmologist, is the László Bitó Associate Professor of Ophthalmology and Pathology & Cell Biology at Columbia University Medical Center (CUMC).

He has been investigating two promising stem cell treatments, which he hopes might one day cure any number of degenerative retinal diseases, including LORD. Over the last year and a half, Mr. Jonas has been intensively researching other ways to help.

“Our way of doing philanthropy is not casual,” Mrs. Jonas says. “We do extensive research; we speak to all the leaders of the field because we don’t want to reinvent the wheel. So we spoke to many, many experts, and we spent a lot of time, just as we did with our nursing and our veterans’ healthcare program. And in the end, Donald really narrowed it down.”

This rigorous approach and the success of previous Jonas efforts bode well for the future of the new Children’s Vision Care initiative, says G. A. (Jack) Cioffi, MD, the Jean and Richard Deems Professor, Edward S. Harkness Professor, and Chairman of the Department of Ophthalmology. “Barbara and Donald Jonas,” Dr. Cioffi says, “exemplify the philanthropic community in that they realize that they can have a worldwide impact on diseases that have been a direct threat to their family. And they are very smart about how they direct their funds.”

In this case, the couple have chosen a cause with great potential. About 10 percent of preschoolers have eye or vision problems. Yet many of these problems go undetected because the children fail to receive needed screening. These vision problems can cause learning difficulties, delayed social development, impaired motor skills, and balance problems. “Children have their whole lives ahead of them,” Mr. Jonas says. “This might help give those with vision problems a better life.”

Steven E. Brooks, MD, the Anne S. Cohen Professor and Chief of Pediatric Ophthalmology, believes this program could have a big impact. The amount of funding is “substantial,” Dr. Brooks says, adding that “it will help build a solid foundation for a robust and enduring program encompassing research, patient care, advocacy, and teaching, all to the benefit of children.”

Jonas Children’s Vision Care is designed to help fill an important and underfinanced area because most vision programs are cross-generational and do not focus specifically on promoting children’s visual health, notes Darlene Curley, CEO of the Jonas Family Fund. Overall, she notes, the program will take a five-pronged approach to protecting vision:

The Jonas Children’s initiative, Dr. Cioffi says, will draw upon Columbia Ophthalmology’s
many strengths. Those include strong clinical care from infancy throughout life, genetic testing of individuals with eye disease for diagnosis and treatment, the resources of a wide array of laboratories, and the University’s many initiatives in an interdisciplinary field called translational research.

According to Dr. Cioffi, a major feature of the project lies in its combination of clinical care with the work of geneticists engaged in basic research. “We’re going to tie it all together,” he says, “through education, testing, advocacy, great basic science, and the delivery of outstanding clinical care.”

About the Barbara and Donald Jonas Family Fund
The Barbara and Donald Jonas Family Fund was established in 2005 with monies raised through an auction at Christie’s of a portion of the family’s noted contemporary art collection. The Fund’s lead initiative is the Jonas Center for Nursing and Veterans Healthcare, a first-of-its-kind philanthropic program dedicated to advancing nursing scholarship, leadership and innovation. Other areas of focus include environmental health and low vision and blindness. To date, the Jonas Family Fund has awarded $25 million in grants.