This profile is part of a series from the The Graduate Center, City University of New York of students graduating in June, as told in their own words.

I never thought that I would have the opportunity to earn a Ph.D. When I came to this country from Honduras, one of the poorest and most illiterate countries in the world, I was placed in the back of the room and ignored. This little foreign girl from Central America was not worth teaching. 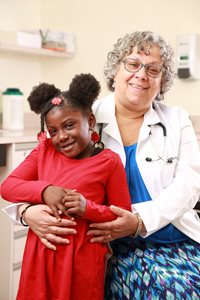 I taught myself to read by age eight or nine. Maybe that is why health literacy was the topic of my doctoral research.

I was discouraged from attending college, but those were the days of free tuition and open enrollment, so I applied to Hunter College. I spent five wonderful years there and learned a tremendous amount, but did not get a degree.

I enrolled at Lehman College after the birth of my first child and earned my bachelor’s degree, which kept me and my child afloat when I escaped an abusive marriage. I returned to Hunter College and became a nurse practitioner.
* * *
After graduating, I provided HIV care in the South Bronx neighborhood where I grew up. One day, Dr. Kathleen Nokes, now Professor Emeritus at Hunter College, offered me a teaching position and asked for something in return: that I apply to the new doctoral program at the Graduate Center.

I applied, was accepted, and Dr. Nokes became my mentor. She encouraged and supported my growth as a scholar, and introduced me to an international group of nurse scientists conducting research in HIV care. She also advocated for me to become a Jonas Nurse Scholar Leader.
* * *
I am proud of my achievements during my time at the Graduate Center. I published four articles before I completed my doctorate. I received two research grants: one from Sigma Theta Tau and the other from the New York State Nurses Foundation. Dr. Donna Nickitas nominated me for a Herman Biggs Policy Fellowship.

I am now faculty at Rutgers University School of Nursing, where I am the chief clinical officer of their nurse-managed federally qualified health center, which serves the poor in Newark, New Jersey, including undocumented citizens from Honduras.

I am proud to be a CUNY graduate and walk at Commencement wearing the regalia of the City University of New York, because CUNY and the wonderful professors who teach there gave me the opportunity to change my life and make positive contributions to the lives of others.